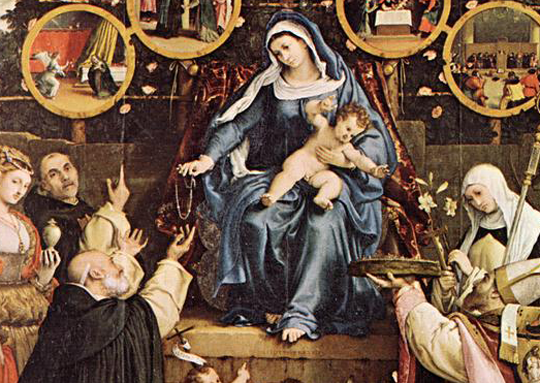 St. Dominick and the Rosary

Millions of Catholics use the rosary, and its introduction is often attributed to St. Dominick, who, in 1214, according to many accounts, saw an apparition of the Virgin Mary. She was said to have spoken to him and told him the key to his success in ministry would be to teach the people how to say the rosary. The legend connected with the rosary recounts that St. Dominick took the Virgin Mary’s advice to heart and from that time forward preached the rosary—so much so that when he founded the Dominican order of preachers as well as the Dominican order of nuns, they too were dedicated to both the Virgin Mary as well as the rosary.

The typical rosary the Western Roman Catholic Church uses consists of five decades (five tens) that begin with the Our Father (also known as the Lord’s Prayer to non-Catholics) and then ten Hail Marys followed by a Glory Be. If you count the number of beads and the prayers, there are seven Our Fathers, six Glory Bes, and fifty-six Hail Marys on the modern rosary.

However, its history and development are interesting and can be controversial for those who have a strong devotion to both the Virgin Mary and the rosary.

Based on most of the historical research, the development of the practice of using beads in prayer has a very significant connection to the practice of the early monks in their Liturgy of the Hours, which began with the early Christian ascetics and hermits of the third and fourth centuries. These holy men desired to separate themselves completely from the vices and temptations of society as well as some of the corruption that was creeping into the church, and they developed strict disciplines to keep their minds and bodies focused on spiritual things. The Liturgy of the Hours (the equivalent of the Office, which is the required obligation of every Roman Catholic cleric to pray through daily) originally included reading through the 150 Psalms. These were broken into fifteen decades of ten psalms that would be recited or prayed at various prescribed times during the day. These daily readings were a condensed version of the entire Liturgy of the Hours and were often called the breviary (from the Latin brevis, meaning “short or concise”).

By the Middle Ages, or the medieval period, in Europe (roughly from the fall of Rome in the fifth century until the Renaissance, beginning in Italy in the fifteenth century), the spiritual lives of the monks and priests and many of those in the religious orders fully embraced the fifteen decades of prayers, which were often shortened to five, repeated three times during the day.

The common people thought very highly of the monks and other religious ascetics, and many of the people came to the monks to help them learn how to pray. Since most of the common people were illiterate, the monks taught them a few prayers they could easily memorize and then repeat often during the day. History records that some of these early prayers included the Our Father (Latin: Paternoster), which the people often chanted in Latin despite the fact that by that time most didn’t understand it.

Over a period of time, the custom even among the monks was to tie 150 knots on a cord and use them to keep track of their chants of the Paternoster. For those who could not read Latin, these 150 chants became known as the poor man’s Breviary and was most likely the Christian origin of the modern-day rosary. By the fourteenth century, groups of Christians who had a deep devotion to the Virgin Mary modified the poor man’s Breviary into five decades of Hail Marys rather than the Our Fathers.

All of this is a great story tracing the history of the rosary and may be completely factual. However, most historians, including Catholic historians, are not able to connect any reference by St. Dominick to the rosary. In fact the Nine Ways of Prayer of St. Dominick that were attributed to him, just after his death, mention neither the rosary nor the Virgin Mary.

The official encyclopedia of the Catholic Church, New Advent, comes to a similar conclusion:

[We] possess hundreds, even thousands, of manuscripts containing devotional treatises, sermons, chronicles, Saints’ lives, etc., written by the (Dominican) preachers between 1220 and 1450; but no single verifiable passage has yet been produced which speaks of the Rosary as instituted by St. Dominick or which even makes much of the devotion as one specially dear to his children. The charters and other deeds of the Dominican convents for men and women…are equally silent. Neither do we find any suggestion of a connection between St. Dominick and the Rosary in the paintings and sculptures of these two and a half centuries. Even the tomb of St. Dominick at Bologna and the numberless frescoes representing the brethren of his order ignore the Rosary completely. (24)

According to many Protestants and detractors of the rosary, the rosary encourages both vain repetitions in prayer as well as prayers directed to the Virgin Mary, a practice the reformers in the sixteenth century discouraged. Some claim the history of the rosary is closely related to the development of the Muslim Tisphi, or worry beads, that have been popular since the ascent of Islam in the seventh century. According to Islam the Tisphi contains thirty-three beads that are used three times for a total of ninety-nine, which equates to the “beautiful names of Allah.”

Male Christians in the Middle East adopted the same practice, using the thirty-three beads to represent the thirty-three years of the earthly ministry of Jesus Christ and repeated the beads three times, representing the three members of the Trinity.

However, my independent research indicates that many religious cultures, including Christian, Islam, and Hindu, used beads at various times to assist in their prayers and devotion. It would be natural that Christians under the rule of Islam would modify cultural patterns to fit their beliefs more closely.

Many adherents of the rosary claim a conclusion regarding the connection between St. Dominick and the Virgin Mary and the rosary cannot be dismissed because of the absence of literary evidence (in the study of logic, an inference referred to as an argument from ignorance). Many of the faithful devotees of the rosary claim that Marian apparitions, healings, and answers to prayers can be attributed to praying the rosary and encourage its use. As a closing comment, many of the Catholic popes, including most of the recent ones, have also championed the rosary.