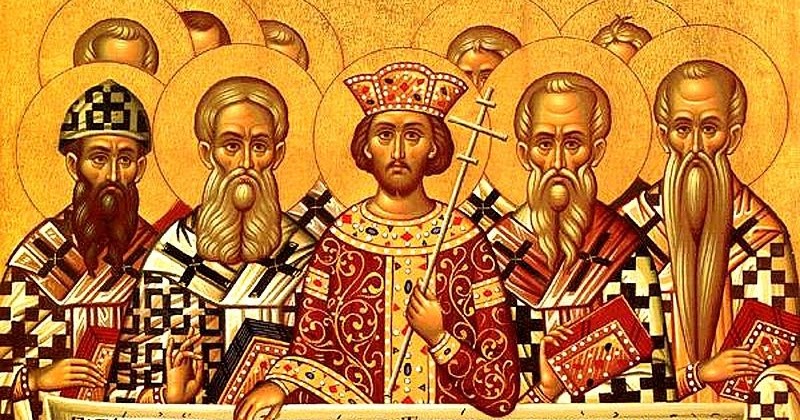 The Nicene Creed has an extraordinary history. It goes back to the time of Constantine, whom I mentioned in the previous chapter. Constantine was the emperor of Rome and a convert to Christianity. He wanted his empire unifi ed and was alarmed by a number of disputes, schisms, and even heresies that existed in the church at the time.

Constantine called the Council of Nicaea in AD 325 and assembled a group of bishops at what we now know was the First Ecumenical Council of the Church. Scholars estimate that from 220 to as many as 318 bishops attended. Constantine had invited many more, but we can excuse their absences, as travel back in the fourth century was diffi cult. In addition the persecution of the Christians had been very severe in parts of the empire and had only recently ended, so traveling was not a likely part of the bishops’ job description.

The eastern region of the empire was fully represented; three of the high-ranking patriarchs of Alexandria, Antioch, and Jerusalem were in attendance.14 The patriarch, or bishop, of Rome, Pope Sylvester, who ruled from AD 314 to AD 335, did not attend the Council of Nicaea; however, he did send some representatives.

At the time of the council, there were a number of competing doctrines in the church. These ranged from articles of the faith concerning the true divinity of Christ and the nature and validity of baptisms to the roles of the bishops and priests and the celebration of Easter.

Both Constantine and the bishops had a number of key objectives. The first was an end to schisms. The second was a decision on the controversial teachings of a priest named Arius. The third was ultimately to achieve peace and unity within both the church and the empire.

While the bishops could have created a definitive document that clearly defined and embraced all of the various teachings, canons, sacraments, and doctrines of the church, they surprised most people at the time, and historians today, by carefully crafting a short creed that summarized what it meant to be a Christian.

The entire council declared and ratified these simple beliefs of the Christian faith in the Nicene Creed. Since that time, nearly
1,700 years later, the creed has been the simple litmus test for what we consider orthodox—not Orthodox as in the branch of Eastern Christianity, but orthodox from the Greek root orthos, meaning “right, true, or straight.”

Here, in its entirety, is the Nicene Creed:

We believe in one God,
the Father, the Almighty,
maker of heaven and earth,
of all that is, seen and unseen.
We believe in one Lord, Jesus Christ,
the only son of God,
eternally begotten of the Father,
God from God, Light from Light,
true God from true God,
begotten, not made,
of one being with the Father.
Through him all things were made.
For us and for our salvation
he came down from heaven:
by the power of the Holy Spirit
he became incarnate from the Virgin Mary,
and was made man.
For our sake he was crucifi ed under Pontius Pilate,
he suffered death and was buried,
and rose again on the third day
in accordance with the Scriptures.
He ascended into heaven
and is seated at the right hand of the Father.
He will come again in glory
to judge the living and the dead
and his kingdom will have no end.

We believe in the Holy Spirit, the Lord, the giver of life,
who proceeds from the Father [and the Son].
With the Father and the Son
he is worshipped and glorifi ed.
He has spoken through the Prophets.
We believe in one holy catholic and apostolic church.
We acknowledge one baptism for the forgiveness of sins.
We look for the resurrection of the dead,
and the life of the world to come. Amen.

This simple creed is what we believe! Catholic, Orthodox, Presbyterian, Methodist, Pentecostal, Baptist, Lutheran—all Christian churches embrace the same creed. There are only thirty-five lines in the creed, just 226 words. Approximately 60 percent of it is about the nature of Jesus. In the creed we state our belief in His oneness with the Father, His virgin birth, His death for our sins, His resurrection, and His second coming.

There is no mention in the Nicene Creed of the bishops, the pastors, or the priests. There is not one word on the governing authority of the church, whether it is a pope, a bishop, or a deacon board. There are no words regarding the Mass, worship specifics, or special liturgies. There is only one line that refers to the church at all: “We believe in one holy catholic and apostolic church.”

This is what Jesus prayed for as well:

The word holy refers to the fact that the church is to be separated or holy unto God and is in fact the Body of Christ. The word catholic is from the Greek word katholikos, meaning “universal.” The word apostolic refers to the fact that the teachings of the apostles are the foundation of the church. Finally the word church, is from the Greek word ekklesia, which is a compound word meaning “to call” and “out from and to.” In other words, the church, or ekklesia, is those whom God calls out from the world and calls to Him.

The text above is from pages 38-44 in Gettysburg Address: The Nicene Creed Chapter 8 of "Roaming Catholics"