Get Into The Boat 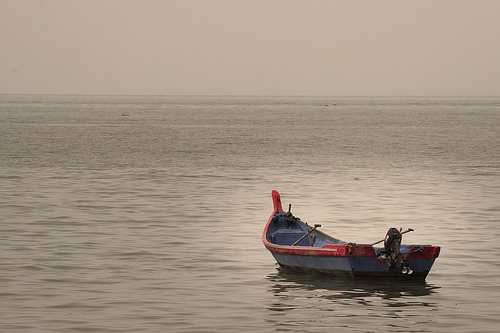 Many have read these account in all four gospels of Jesus feeing the 5,000.   For the benefit of our more contemporary culture, the 5,000 count was of the men.  Many theologians and theologians would guess that there were 13,000 to 15,000 including women and children.

In three of the gospels, the account that immediately follows the feeding of the 5,000 is the disciples in the storm.   Here is the account in the Gospel of John, Chapter 6 verses 16-21.

"When evening came, his disciples went down to the sea, got into a boat, and started across the sea to Capernaum. It was now dark, and Jesus had not yet come to them. The sea became rough because a strong wind was blowing. When they had rowed about three or four miles, they saw Jesus walking on the sea and coming near the boat, and they were frightened. But he said to them, “It is I; do not be afraid.” Then they were glad to take him into the boat, and immediately the boat was at the land to which they were going."

These two gospel accounts, the feeding of the 5,000 and the disciples in the storm are connected, not just by proximity but also in purpose.     This same account in Matthew gives us a connection.

Immediately Jesus made the disciples get into the boat and go on ahead of him to the other side, while he dismissed the crowd. (Matthew 14:22)

I had read this verse a number of times before but I finally I understood the connection.  Note that it is Jesus that told the disciples to go into the boat and push off into what was going to be a storm.  The Bible describes the storm as being “contrary.”    Contrary would be one way to describe the storm, the other way would be huge, gale force winds, being buffeted and battered.  The disciples would be rowing against it and doing everything in their power but would be helpless and be making no progress.
Yet it was Jesus that told them to get into the boat.
Let that sink in for a moment because this connection between these accounts in the Bible and the application for our life can be huge.
Likely, you have faced a similar storm.  It may not involve a boat or water but the feeling would be the same.   The storm would be ‘contrary.”   Life sometimes pushes and batters us into submission.  We strain to do everything we can to make some progress to no avail.
During these times, we often wonder where God is.  We wonder if he sees us in the storm. We are often told by well-meaning friends that the safest place to be is in the center of God’s will.   The only problem with this saying is that it doesn’t feel during the storm to be true.
Note however in the account given in Mark that Jesus does indeed see.


Later that night, the boat was in the middle of the lake, and he was alone on land. He saw the disciples straining at the oars, because the wind was against them. Mark" and he, saw them.  (Mark 6:47&48)

The disciples felt alone, they thought Jesus should have come but they didn’t see him, didn’t see anything because of the darkness BUT JESUS SAW THEM,  but the reality was they were never alone.
Let this illustration encourage you.  Regardless of your circumstances or difficulties in your particular storm,  Jesus sees you.   In addition, when you feel God calling you, leading you, speaking to you through the scriptures or through other means, be sure to get into the boat.
Being in the boat, in the center of God’s will may not be the safest place, but it is the right place.
Do you like this post?
Tweet