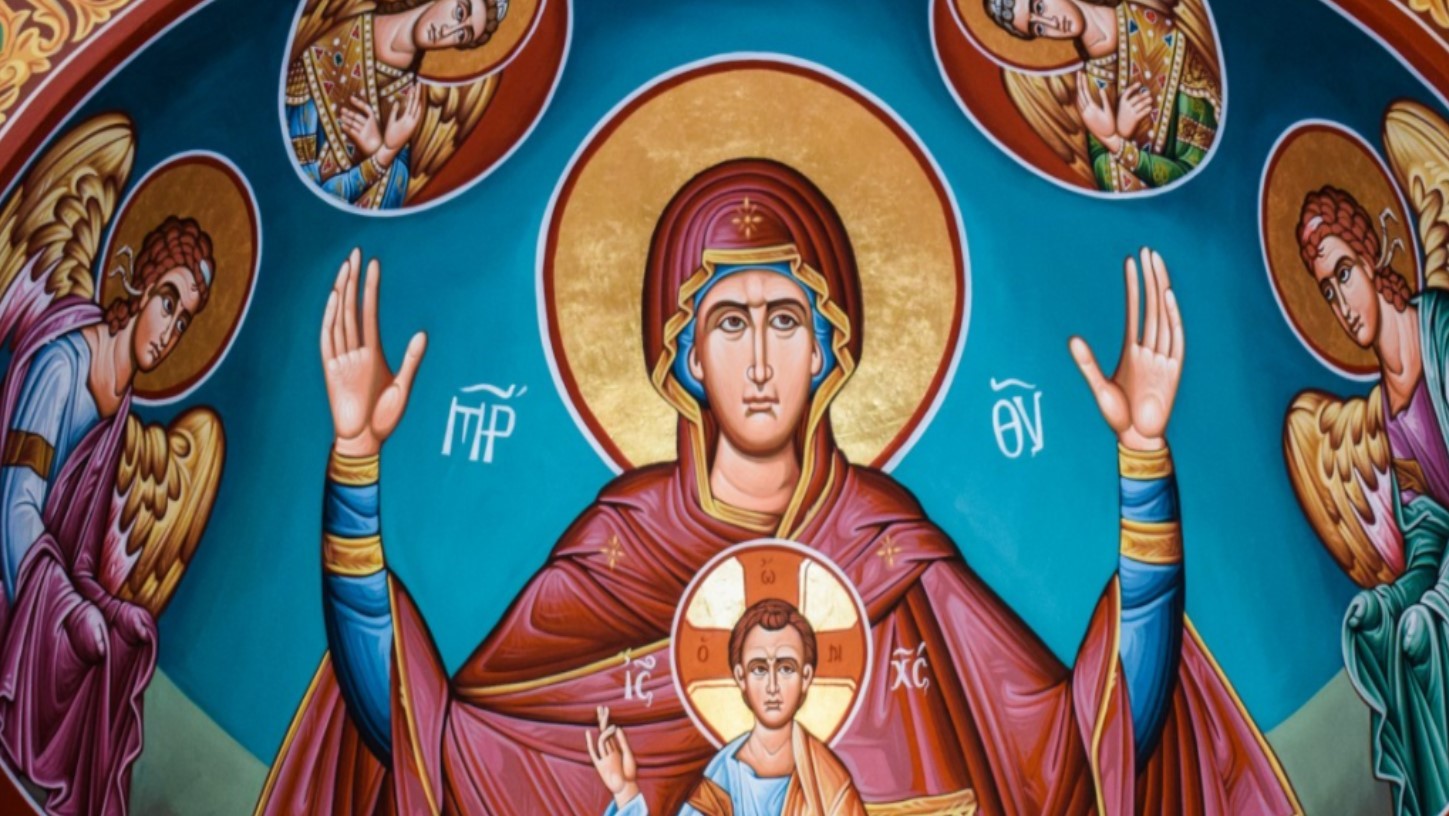 There are four official Catholic doctrines related to the Virgin Mary, often referred to as the Four Marian Dogmas. These are:

1) Mary as the Mother of God.
2) The Immaculate Conception.
3) The Perpetual Virginity of Mary.
4) The Assumption of Mary.

While some of these dogmas are relatively recent official additions, their formation, belief, and acceptance go back centuries, with the oldest going back to the Council of Ephesus (AD 431). Each has an interesting and highly documented history. We’ll address each one briefly, going from the oldest to the newest.

Mary as the Mother of God

This reasoning was hotly contested in the fifth century. By that time the veneration of the saints as well as the Virgin Mary was common, and the Virgin Mary had a position of high honor (Latin: hyperdulia) in the church. However, at the time, there was also a controversy centered on the teachings of the archbishop of Constantinople, Nestorius, who argued that Mary’s title in her role regarding the birth of Jesus should be Christotokos (Greek: Χριστοτόκος, “Christ bearer”) rather than Theotokos (Greek: Θεοτόκος, “God bearer”).

Theological terms are often debated and their definitions overly complicated, as if to baffle rather than clarify. But for the scholar, there are serious implications in the different terms. Nestorius argued that Jesus had two natures, one divine and one human, and in the incarnation the God-man became man.

The Nestorian issue was addressed at the Councils of Ephesus (AD 431) and Chalcedon (AD 451), and the terms Theotokos and/or Mother of God were officially attributed to the Virgin Mary. While this title had more to do with the nature of Jesus Christ, it was a huge win for those in the church who were, at the time, embracing more of the mystical traditions of the Virgin Mary. Interestingly, much of the then-popular folklore about Mary, including how angels had attended to her after the crucifixion, how John and the Apostles were transported to her side, and how she was able to perform miracles and answer prayers, were part of an apocryphal book called Transitus Maria. (21) The pope condemned this book in AD 500, but many of the stories survived and became part of the determination for some of the other Roman Catholic doctrines regarding the Virgin Mary.

The second of these doctrines is the Immaculate Conception. This Catholic doctrine embraces the teaching that from the moment of her conception, the Virgin Mary was preserved from original sin. The Catholic Church has taught since the fourth century that the sin of Adam was passed on to all succeeding generations and represented the original sin of mankind that was removed through baptism. As God picked the Virgin Mary to be the mother of the Christ child, she was preserved from the stain (Latin: macula) of original sin. Further, as Mary was declared full of grace by the angel Gabriel, this condition was a declaration of what was, not what would be.

Many people misunderstand this dogma of the Roman Catholic Church. This teaching does not refer to Jesus’s conception, which, according to scripture and accepted by all Christians, was through the power of the Holy Spirit. Nor does this teaching indicate that Mary remained sinless. Catholics often get this wrong and defend the Virgin Mary as the sinless one when the dogma and official teaching refer only to original sin, not all sin. However, as the sin of Adam also refers to the predilection of all men to be sinners, it would have been a natural assumption, perhaps intentional, that Mary actually remained sinless.

The official declaration of the doctrine of the Immaculate Conception didn’t come until December 8, 1854, when Pope Pius IX declared (and I paraphrase) that the Virgin Mary was conceived in the first instant of her conception by a unique, singular grace and privilege of Almighty God in view of the merits of Jesus Christ, the Savior of the human race, and she was therefore preserved exempt from all stain of original sin. (22)

Many non-Catholic observers have suggested this declaration was a test balloon and preamble to the doctrine of the infallibility of the pope that the first Vatican Council ratified in 1870.

The Perpetual Virginity of Mary

One of the more historically and culturally interesting doctrines regarding the Virgin Mary—one that Roman Catholics and the Eastern Orthodox accept almost universally, though other Christians reject it—is the Perpetual Virginity of Mary, the mother of Jesus. For many who attend my classes on Roman Catholic theology and the history of the church, this is the one dogma, the one teaching of the Catholic Church that leads to the most discussion and dialogue.

From the Roman Catholic perspective, the perpetual virginity of Mary is so integral to the mystique and veneration of Mary, it goes unchallenged. Virgin is not a fi rst name but a condition, and if she is called the Virgin Mary, it’s not because she once was but because she always was and always will be.

Most Protestants are not even aware that this would be part of the Roman Catholic doctrine regarding the Virgin Mary. The belief in Jesus’s being conceived while Mary was still a virgin is nearly universally accepted and unquestioned. However, even a casual reading of the New Testament provides references to a mother and father, a man and wife, who lived together and raised their children. Further multiple references to the family include references to brothers and sisters of Jesus and no further explanation of an extended family or previous marriage.

However, Catholic and Orthodox scholars argue that some of these references to brothers and sisters of Jesus could actually have referred to an extended family or cousins. In addition, at the time of the Protestant Reformation, the belief in the perpetual virginity of the Virgin Mary was so universally accepted that both Martin Luther of Germany and John Calvin, the French reformer and great theologian, not only believed in it but were defenders of it as well.

Mary’s perpetual virginity versus her ultimate sexual union with her husband, Joseph, may be debated but has little if any impact on the more important doctrines and teachings of the church. Let it be said we may agree to disagree.

The Assumption of Mary

The official doctrine of the Assumption of Mary is very recent, added only in 1950 by Pope Pius XII. However, Pope Leo IV was known to have permitted an annual feast celebrating her assumption as early as the eighth century. Church historians agree that there is nothing written in either the biblical or other historical records regarding Mary’s demise,
departure, death, or assumption.

Apparently the ancient church identified two different locations of Mary’s grave. There are historical records indicating early Christian pilgrimages to Mary’s burial site in the Kidron Valley, near Jerusalem, and the ancient city of Ephesus—locations that are more than 1,100 miles apart.

While Eastern (Orthodox) and Western (Roman Catholic) teachings regarding Mary are similar, the Eastern Orthodox teaching is that the Virgin Mary died and was resurrected three days later. The Roman Catholic teaching is interesting, as while many teach the Virgin Mary was assumed directly into heaven, the official teaching of the church prior to 1950 was that she died and then was received later both body and soul.

While the Western church didn’t necessarily teach about a three day interval, Pope Pius XII’s proclamation avoided the subject altogether and simply declared that “the Immaculate Mother of God, the ever Virgin Mary, having completed the course of her earthly life, was assumed body and soul into heavenly glory.” (23)

Since the time of the Reformation, most non-Roman Catholic Churches and denominations have not tried to encourage overtly or suppress the teaching of the Assumption of the Virgin Mary. Catholic theologians agree there is no biblical support of the doctrine, but sacred tradition embraces it. Many non–Roman Catholic theologians, having no biblical evidence to support the doctrine, don’t believe it to be helpful theology.

Mary Dogmas Immaculate Conception Mother of God Assumption of Mary Perpetual Virginity
Do you like this page?
Tweet