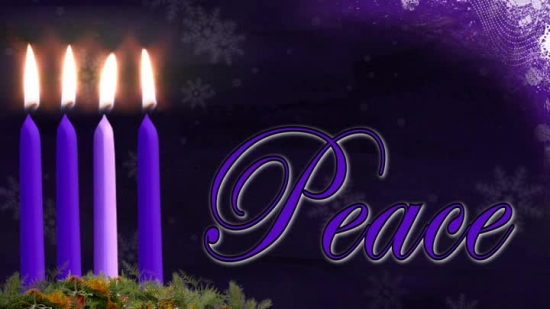 This week we celebrate the fourth week of advent.  Advent is a season of for many Christians that includes the four weeks prior and culminating with Christmas    The season of Advent is considered the beginning of the church year, primarily because it recounts the beginning chapters and verses in the New Testament.  During Advent, we also look forward and prepare for the second coming of Jesus.  In the Bible, these prophecies are referred to as the “last days”.

Each of the four Sundays in Advent are assigned one special focus or application:  Hope, Peace, Joy and Love.  In this fourth week of advent we look at Peace.

One of the major Messianic prophecies in the Bible is in the Book of Isaiah, Chapter 9 verse 6.  In these verses we see Jesus as the Prince of Peace.

“For to us a child is born, to us a son is given, and the government will be on his shoulders. And he will be called Wonderful Counselor, Mighty God, Everlasting Father, Prince of Peace.” Isaiah 9:6

While Jesus was the Prince of Peace, we mistakenly think that the peace that He brings is from war or aggression.  We can easily forget that the Peace that Jesus brought was primarily between God and Man.

We can be the recipients of that peace with God through Jesus Christ.  The Apostle Paul also talks about this peace impacting both Jews and Gentiles:

But now in Christ Jesus you who once were far off have been brought near by the blood of Christ.  For He Himself is our peace, who has made both one, and has broken down the middle wall of separation, 15 having abolished in His flesh the enmity, that is, the law of commandments contained in ordinances, so as to create in Himself one new man from the two, thus making peace, 16 and that He might reconcile them both to God in one body through the cross, thereby putting to death the enmity. 17 And He came and preached peace to you who were afar off and to those who were near. 18 For through Him we both have access by one Spirit to the Father. (Ephesians 2:13-18 NKJV)

In Jesus we can be complete, we can have peace. The Hebrew word for peace is Shalom which also means completeness and well-being.   Jesus came to save us, to make us complete.  By trusting in Jesus, the Son of God, who died on the cross for our sins, we can experience true peace, or shalom, of God.