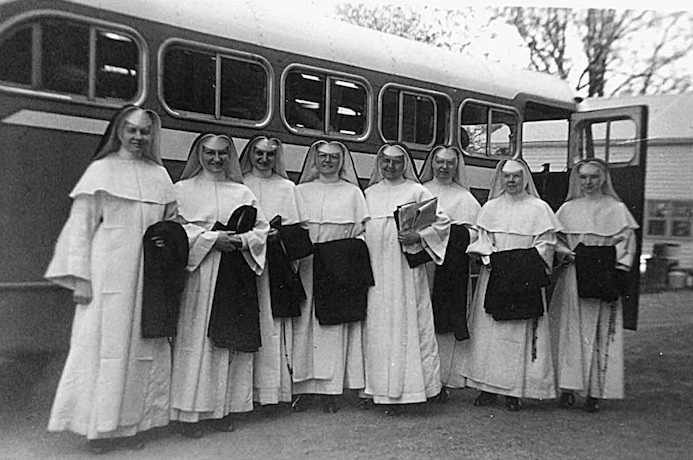 In many families, people believe they can’t attend events at churches other than their own denominations. The Roman Catholic Church formalized this idea a number of times over the years, including in the St. Joseph Baltimore Catechism, which was first published in 1885.The Catholics were not the first to put together a catechism. The lack of religious instruction that both the clergy and laity had dismayed Martin Luther, and he published Luther’s Large Catechism in 1529.
The Roman Catholic Church was slow to respond to Luther. After the Council of Trent, however, there was a renewed emphasis on education, particularly for the clergy. While early Catholic catechisms going back to the seventeenth century were for the clergy to read, not the laity, the Baltimore Catechism had an edition just for students.
My first Baltimore Catechism was probably a condensed version for elementary students. I remember it was green, and I kept it in my desk at school. It was likely an updated version of the original, but it still seemed old even back in the 1960s. The Baltimore Catechism consisted of lessons, a few prayers to memorize, and a number of questions.
The original catechism is now in the public domain, so I was able to find a couple of the questions and answers that dealt with this issue of visiting other churches, including joining a Cub Scout pack.
Q 205. How does a Catholic sin against faith?
A. A Catholic sins against faith by apostasy, heresy, indifferentism,and by taking part in non-Catholic worship.
Q 206. Why does a Catholic sin against faith by takingpart in non-Catholic worship?
A. A Catholic sins against faith by taking part in non-Catholic worship when he intends to identify himselfwith a religion he knows is defective.
For hundreds of years, both Catholics and Protestants have taught that it is sinful, harmful, and dangerous to get too close to each other. This is so unfortunate, as there is so much we can learn from each other.
The Bible clearly tells us there is only one church, with Jesus as the head. In the Gospel of John, Jesus prayed for unity. He was praying for His disciples, but He included all of us:
Neither pray I for these alone, but for them also whichshall believe on me through their word; That they all maybe one; as you, Father, are in me, and I in you, that theyalso may be one in us: that the world may believe that youhave sent me. And the glory, which you gave me, I havegiven them; that they may be one, even as we are one.(John 17:20–21, NASB)
Many can relate to this struggle between Catholics and Protestants.
Religious persecution is no laughing matter, as the Thirty Years’ War (1618–1648) devastated much of Europe, and Germany lost literally one half of all of its young men in battles and the resulting pestilence and disease. This was not a war against barbarian pagans but with Christians drawing swords against other Christians. These were nations and kingdoms and cities led by kings who believed in God, understood the Trinity, embraced the death and resurrection of Jesus Christ for their sins as a historical fact, yet found it appropriate to wage war against others who believed the same.
>>>>>>>>>>
The text above is from pages 2-4 in The Catholics and the Publics- Chapter 1 of "Roaming Catholics"  Picture at the top is Dominican nuns arriving at St. Joseph’s School in the early 1960s. Photograph in the public domain.
Was Peter the first Pope? Should Christians pray the Rosary?  Should priests be married?  These are among the provocative topics addressed in Roaming Catholics: Ending the wandering to embrace the wonder"
This thoroughly researched book presents the development of the Catholic Church in an engaging way to help Christians understand their common history shared by all.  The apostle Paul referred to the church as the "Body of Christ," not the "Body of Christians."   Rather than Jew and Greek, slave and free, male and female he proclaimed we are to be one in Christ.
Pastor and theologian Kenneth Behr shares his own religious evolution from a Catholic altar boy to an evangelical pastor and engages readers with a parallel story of the evolution of Catholicism.
Click here to buy (via Amazon) the book
Click here to buy (via Amazon) the study guide;   Study guide is available free via Kindle for Amazon Prime users
catholic Catholic School Protestants
Do you like this post?
Tweet